Ultimate BattleStrike is an FPS where you form part of a special command unit and shoot all the enemies that cross your path. Use the weapons in your arsenal and move about each setting while shooting every opponent.

In Ultimate BattleStrike, you will be given dozens of missions to complete to progress through the map. The controls aren’t difficult at all and will seem like any other game in this genre. On the left of the screen is a joystick for moving in any direction. At the same time, on the right are the action buttons for shooting, reloading ammo or throwing special items like grenades or other projectiles.

Keep in mind that Ultimate BattleStrike lets you make the shooting automatic if you want, meaning that you can focus your attention on the enemies’ strategic positions and avoid getting caught in the crossfire. What’s more, during each game, you can change weapons whenever you need to and also view the missions you need to complete.

Ultimate BattleStrike has realistic visuals with 3D sequences that fully immerse you in the character’s backstories. By moving through the different parts of the map, your job is to shoot your enemies to advance while collecting new weapons and resources that will improve your task force. 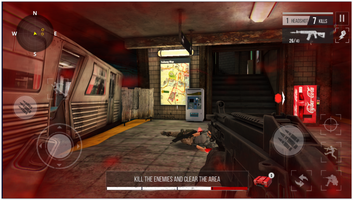