The Catapult 2 for Android

The Catapult 2 is the second installment of an arcade game that challenges you to destroy your opponent with a catapult.

Gameplay in The Catapult 2 is simple: in order to throw a rock all you have to do is click on the screen and slide it back until you reach the right angle. You can use the rocks to hit your rivals as well as destroy their catapults and let them live. You can also break the rocks that they throw your way if you can actually impact them while in the air. Be quick though, because if your attack is too slow or chaotic, you can get hit by the rock and then your adventure will be over.

As soon as you destroy your opponent, you’ll have a few seconds to rest and soon enough you’ll see another opponent in another location of the screen. Your objective is to destroy as many enemies as you can. Also, when you’ve gotten rid of a few of them, you’ll start seeing two in a row, then three in a row.

The Catapult 2 is a super entertaining 2D arcade that has simple visuals and an addicting gameplay. 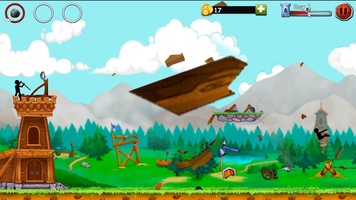 Sort the Forest for Android