Super Stick Fight All-Star Heroes is an entertaining action and adventure video game where you control characters that are directly based on classics of the anime world: One Piece, Naruto, Dragon Ball, Bleach, and so on. Though, of course, they aren’t ‘officially’ them.

The gameplay in Super Stick Fight All-Star Heroes is as follows: you start by controlling any of the stickman-aesthetic characters mentioned above. At the bottom of the screen, there is a virtual joystick to move your character around the scene and a series of attack buttons, among which, of course, is the iconic Kamehameha attack. You can also throw energy balls and rays, create a shield and teleport. What’s more, you will have to regain your energy to be able to use the special attacks. As far as winning or losing is concerned, it’s the usual whoever finishes their opponent’s health bar first, wins. As you win battles, you can unlock legendary characters from other anime series.

Super Stick Fight All-Star Heroes has multiple game modes. You can fight against other players online, play the arcade mode where you face different characters, or you can even play the story mode and unlock new characters and attacks.

Super Stick Fight All-Star Heroes is a good fighting game for Android devices that is openly based on very famous anime, where you can have a fun time landing punches and throwing energy balls. 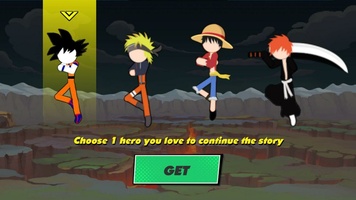 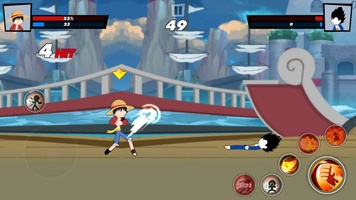