Robocar Poli City Games is a game that’s geared towards children between ages two and six. In it, you get to help Robocar Poli and his friends to put Brooms Town in order. The game is clearly based on the animated TV show by the same name, so you can have fun playing with your favorite characters from the show.

The gameplay in Robocar Poli City Games changes greatly depending on the minigame being played. For example, in one of the first levels, you’ll have to find a lost kitten. To do this, you’ll first have to put up posters around the city, then open up a mailbox where the little kitten has gotten stuck, and lastly, tend to its needs. All this is done using simple gestures on the screen.

In Robocar Poli City Games, you can visit a lot of the familiar locations seen in the show, where you’ll have to solve all sorts of problems. You’ll find dozens of different levels, where you can help Poli, Roy, Amber, and Helly. And each one of the characters in the game has its own skills, perfect for each situation.

Robocar Poli City Games is an incredibly entertaining kids’ game that offers tons of levels, characters, and fun situations that your children are sure to enjoy. 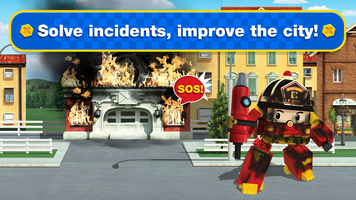 My Town Daycare for Android

My Town : Cinema Free for Android

Keep Your House Clean for Android