KonoSuba: Fantastic Days is a role-playing game with a marked anime style, both in the design of its characters and in the narrative scenes it displays. An RPG with turn-based combat inspired on the light novels written by Natsume Akatsuki and illustrated by Kurone Mishima. In this game for mobile devices, we will enjoy a completely different story from the anime, so it will be a unique experience that we will only be able to live on our smartphones or tablets.

The KonoSuba universe is a virtual world of fantastic medieval appearance where we have been given the mission to put an end to the Demon King and his army of evil beings. To that end, we will take control over Kazuma, a boy who just wants to live a simple life despite everything. Together, we will live all kinds of adventures. We will be also be accompanied by Aqua, Megunim, Darkness, and the rest of this franchise’s characters, full of humor and fanservice.

The action in this RPG is divided into two very distinct parts: turn-based combats and narrative scenes in a visual-novel style. In the latter, we’ll get to know about KonoSuba: Fantastic Days’s world and characters. However, aside from reading and enjoying the seiyu’s wonderful work, we won’t be able to do much else. It is in combats where we will have more decision-making abilities since we will have to defeat different waves of enemies using the powers of each of the members of our team.

In KonoSuba: Fantastic Days we have a huge roster of characters to recruit. Each of them will be sorted into different sorts of fantastic medieval categories (such as warriors, wizards, healers, etc.) and elemental affinities. This will get our attacks more or less powerful, depending on who’s performing them. Being aware of this is essential for more complex battles, as a balanced team will always have a bigger chance of emerging victorious in the combats of this anime-style RPG.

KonoSuba: Fantastic Days is a great role-playing game that perfectly portrays Konosuba: God’s Blessing on this Wonderful World! fun. This anime RPG has a spectacular technical section and countless characters to play with: we will recruit them through the game’s story mode or with the gacha system. That being said, the truth is this game abuses too much fanservice through waifus. 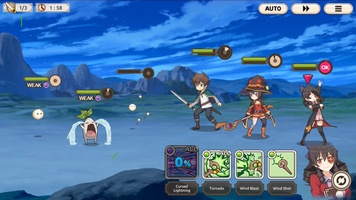 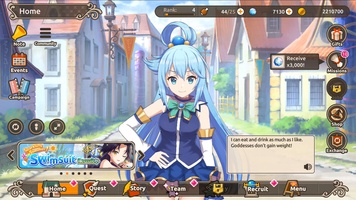