Jungle Adventures 2 is platformer where after choosing your character you need to collect fruit and keep the evil wizard from completing his offering and becoming an immortal being.

After a short introduction to the story a map appears with different zones that get unlocked as you beat the game, with only the first level unlocked at the beginning. The game controls are simple, with the only thing on the right being your buttons to move horizontally and on the left to jump and attack or pick up objects and throw them.

Besides doing double-jumps, your character can also throw stones and fruit bombs to defeat their enemies and end the level. During your run there are secret paths where you can find rooms with extra fruit to collect and boost your score.

Jungle Adventures 2 is very similar to Super Mario from Nintendo in terms of some of the enemies, and feels like a game set in another era, with different options to interact with in your environment. 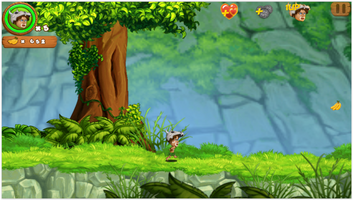 The Last Days for Android

What The Fight for Android