Bomber Friends is a remake of the classic ‘Bomberman’ game made exclusively for multiplayer matches. In this game, you can play against strangers over the internet or your friends using Google Play.

Gameplay in Bomber Friends is very simple: players move through a labyrinth full of blocks that they can destroy with bombs, the objective being to eliminate the other players. When placing a bomb, you need to keep two important things in mind: you can’t go across it (meaning you might get trapped), and the shock it sends out will travel in a straight line.

As you play and win matches, you can customize your characters with hats and other details. With these you can make a truly unique character and distinguish yourself from the rest of the players.

Bomber Friends is a highly entertaining game that will delight not only fans of ‘Bomberman’ but also those who have never played and now have a golden opportunity to do so. 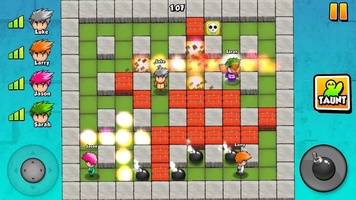 Once Be Human for Android