Alchemy Stars is a role-playing game where you are transported to an ancient universe where there are many different people. Putting your magic powers to the test, you can freely move around this vast world while fighting against dozens of enemies and unlocking new skills.

In Alchemy Stars, there is a turn-based fighting system where you have to go about placing your characters in the arena. Specifically, there is a sort of table divided into different squares that can hold one of these celestial warriors. On the right of the screen is a column that lets you drag each fighter to the place you want.

Depending on the strategy you have chosen and the attacks you use at any given moment, you can be more or less offensive. During each fight, it will also be crucial to analyze the enemy’s qualities to be able to intelligently focus your actions. In any case, always keep in mind the character class and personality to form a balanced team that lets you solve any extreme situation during the games.

Alchemy Stars has an extensive element-packed universe that makes you carefully explore each area of the map. You have to defeat many enemies and to do so, you need to evolve all your warriors’ abilities to win. Only if you create a squad of complementary energies can you win against the most powerful monsters. 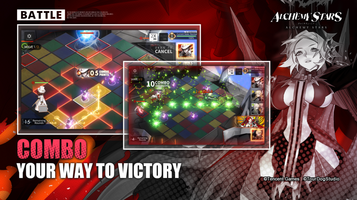 Heroes of Atlan for Android