Albion Online is a traditional-length MMORPG, set in a giant medieval fantasy world, that offers the first real multiplatform experience as Android, Windows, Mac, iOS and Linux players and can play together on the same servers. The result, of course, is a colossal world where you can interact with players from all around the world.

The controls in Albion Online are very well-adapted to touchscreen devices, although it is better to play using a Bluetooth keyboard. By tapping anywhere on the environment, you can get your character to move there. Equally, all you have to do is tap on any element or character to interact with them. The only inconvenient thing about the controls is that, on small-screened devices, it can be a little difficult to manage the inventory. This is also why it’s advisable to play with a Bluetooth mouse.

One of Albion Online’s strong points is your character’s customization. When you start the game, you can use an extensive character editor to make your avatar look however you want, with hundreds of different options available. As you complete missions and level up, you can customize your character’s skills and specialties totally organically, which will let you become the kind of character that you want to be.

Like in many other games of this kind, you can fight against hundreds of monsters in Albion Online, throughout an epic story. However, if moving to a farm to grow food, or building your own house from scratch is what interests you, you can also do that. It’s not all about fighting in Albion Online. Sometimes, the most entertaining thing is to simply spend time with your guild teammates, doing all kinds of tasks and talking with the friends you’ve made.

Albion Online is a spectacular MMORPG where you can share a huge adventure with thousands of players from all over the world. The game’s graphics are excellent and work quite well on almost every Android device. This game is outstanding in every way. 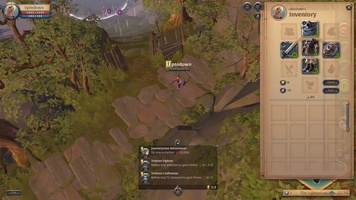